In 1881, Peter Christen Asbjørnsen invited Erik Werenskiold and Theodor Kittelsen to supply illustrations for his “Eventyrbog for børn” (“Children’s Adventure Book”), volumes 1-3 (published in 1883, 1884 and 1887). 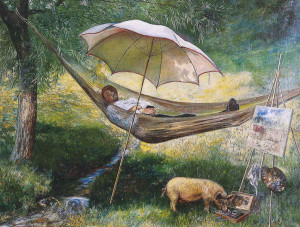 From the autumn of 1881, Kittelsen had a studio in Pultosten, the farm owned by Morgenbladet in Christiania. Having been granted a state scholarship, he journeyed to Paris in the autumn of 1882, here to be inspired both by exhibitions and by other painters before returning to Norway. Then, in the spring of 1883, he returned to Munich.

Two years after having arrived in Lofoten, he travelled south and met Inga Dahl fra Drøbak, whom he married soon after. The couple settled down in Skåtøy in the autumn of 1889.